What can you say about JDjemaa El Fna! Well quite a lot!! In Marrakesh’s main square, (pronounced ‘jema’ – the ‘d’ is silent), you’ll discover theatre in progress. Operating since the 11th century as an important trading settlement for the camel trains carrying their precious cargos of gold, spices, ivory and slaves from Timbuktu. It still has an element of this even today. Berbers coming to town to sell their goods with their giant turbans and snake charmer warming up in the sun.

Locals delight in telling tourists that its name means ‘assembly of the dead’, where once the heads of criminals were set on spikes after their execution as a warning to others (although fortunately, these days the plain-clothes Tourism Police are there to keep a watchful eye out). Unesco declared Djemaa El Fna a ‘Masterpiece of World Heritage’ in 2001 for bringing urban legends and oral history to life nightly, and although the storytellers who once performed here have since given way to to other types of street entertainment, Djemaa’s nightly carnival continues to surprise. Amazigh musicians strike up the music and gnaoua troupes sing while henna tattoo artists beckon to passersby, and water-sellers in fringed hats clang brass cups together, hoping to drive people to drink. Young men trundle across the square to set up portable kitchens with plank benches and tables, and the air is perfumed with the exotic aromas of the world’s largest open air restaurant. 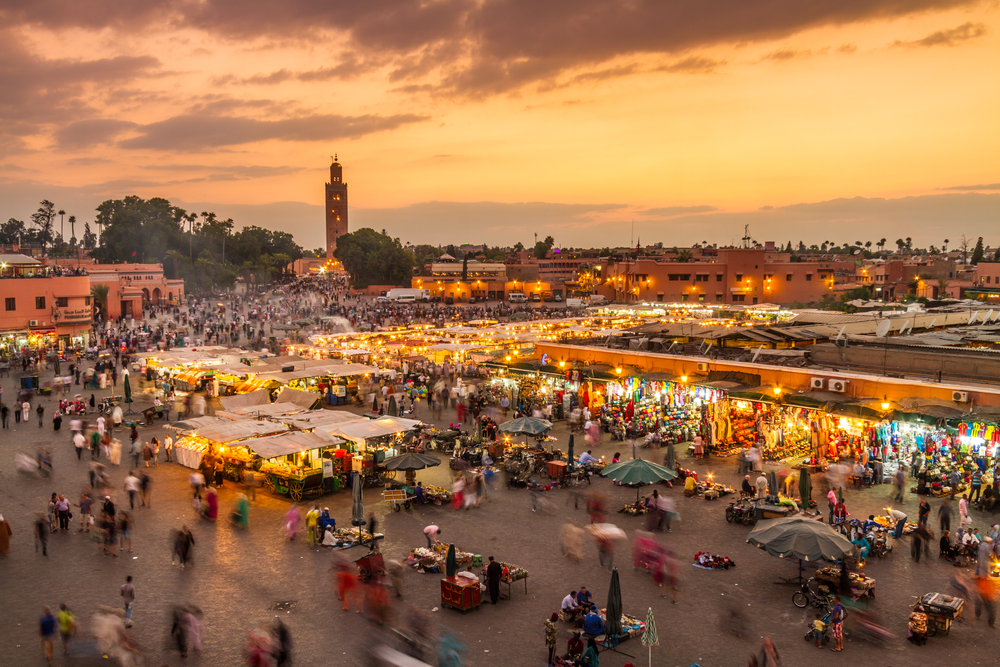 There are plenty of other things to grab your attention t00, some of them disturbing, such as the “dentist” who sets up with his milk crate and puts out a blanket of all the teeth that he’s pulled out. I think to myself “why? Is it going to sell these teeth individually to other people to pop back in? How?? Was he really the first person to create dental implants? Do people make necklaces out of them??” Too many questions, move on Tammie. We did have one unfortunate woman who required a root canal in Fez which she did survive, and I’m glad she had that done before we got to Marrakech because if she had seen this guy sitting on a stool with a pair of pliers I don’t think she would have coped. 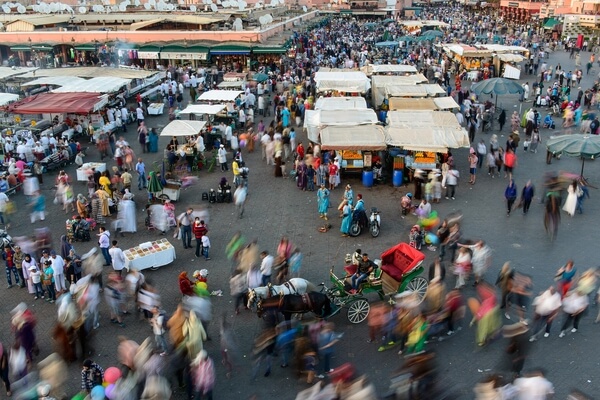 Another thing I found confronting and fascinating was the bare knuckle fist fight. I have never seen anything like it. Originally I thought it was music that people were gathering around and then I noticed my women were wheedling their way into the crowd, (god I hope they weren’t placing bets) wouldn’t surprise me though as I couldn’t look away! My enduring friend and supporter in Marrakech Emma who owns ZamZam Riad and Morocco Retreats said to me one day, “It’s a total shit show Tammie, the Government should really do something about it”. I had to agree, but you know its a shit show I kinda like.

Its hot and steamy, it’s noisy and there’s a lot of food stalls, so its is smelly, but in a kind of good way, and lingering underneath all of that is the orange blossom scent that Morocco is famous for, neroli. I love it, can’t get enough of it. I always stock up on soaps and oils to bring home.

During the day in the square they sell handbags, crockery and fresh pomegranate and orange juice, but it the nighttime you want to experience. We always try to have lunch or dinner at one of the cafes surrounding the square so we can sit, have an iced coffee and overlook the square.  People watching, pure theatre. A young Sudanese refugee once inquired if I needed a sim card, “no sorry I have one already” I said. “How about a big black cock then?” Considering it was only 9am and I hadn’t yet had a coffee I had to decline, maybe later …..

Another critically important aspect of Djemaa El Fna is that is it the Gateway to the souk, yes a labyrinth of  exotic shopping stalls. An Aladdins cave of gift-ware. One of the highlights of taking a group of women to Morocco is seeing their faces light up when they first see this spectacle, just like the many Arabian Nights lamps they will be tempted to buy to take home and remind them of this magical journey 🙂

For those who prefer to listen to their stories 🙂

About the Author: Tammie

Hardly ever happens they will share a room let alo